Crime Syndicates and My Buick

Several weeks ago, I walked out of Wal-Mart to find that my 1996 Buick Skylark wouldn’t start. The starter worked, but it sounded like it wasn’t getting any fuel. So we had it towed in and the mechanic replaced a faulty ignition switch. Strange, I thought, since the starter didn’t seem to be the problem, but sure enough the car started fine after that.

Until the following week, when it had the same non-starting symptom as before. After letting it sit for a few days and trying it occasionally with no success, we had it towed in again.
Turns out the ignition switch was faulty, but there was more: that particular model is equipped with a system that detects is the car has been hotwired. If so, it causes the exact problem I was experiencing: it won’t start. And in my case, the system — which is located in the instrument panel — was malfunctioning. The solution was a new instrument panel.
This is interesting to me because it’s not the only problem that instrument panel has. The indicator light for the transmission — the thing that tells you if you are in park, neutral, reverse, drive, etc. — was spotty; sometimes it would show up, other times it wouldn’t, usually it would flicker a lot. More importantly, however, was that about a month or so ago, the needle on the speedometer had somehow gotten on the wrong side of the “zero” peg. How that happened, I don’t know. Has the peg’s existence started to flicker in and out like the transmission indicator light? Did someone steal my car in the middle of the night and take it up to 180 mph?
At any rate, a new instrument panel would have cost more than $400. However, my mechanic new someone who could sell him a used one for much less than that, but it would take a few days to ship it. I told him to get the used one.
That was two weeks ago. Let me tell you, dealing with my school schedule, Andrea’s temporarily full-time work schedule, dropping off and picking up kids to and from elementary school and babysitters, as well as soccer practice, church, and heaven only knows how many other meetings and such with one minivan is nothing less than insanity-inducing. Not to mention the fact that I fully expect the transmission in the minivan to, at any moment, fall out from underneath the van and erupt in a firey conflagration in the middle of the road.
But yesterday we finally got the car back, and once again it starts fine. The speedometer works, but the little transmission indicator has apparently gone on to Transmission Indicator Heaven. Other than that, the only problem is the fact that the “THEFT SYSTEM” light is permanently lit, perhaps to serve as a reminder of the whole ordeal.
Now the weirdest part of it all, though, is this: 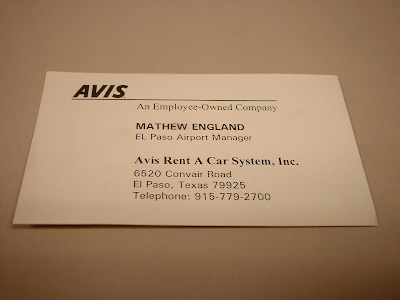 This was sitting on the console of the car, not prominently displayed or anything, but laying there as if it had been tossed aside. The thing is, I’ve never been to the El Paso Airport, and I’ve certainly never rented a car there. So here are my theories:
1. Though they told me they were waiting on a part for two weeks, in reality they sent it down to El Paso to participate in a mafia-run rental car outfit. No doubt the folks who rented my Buick wondered about all the trash in the back seat footwells.
2. While it only seemed like two weeks to us, in reality my car was sent through a time portal and has been living an entire lifetime as a rental car in El Paso.
3. My brother or sister-in-law, when they owned the car and lived in Las Cruces, New Mexico, set the card on the dashboard after returning from a trip and the card fell into the dashboard. My mechanic, while taking apart the dashboard to replace the instrument panel, found the card and tossed it aside.
Sure, #3 might seem more likely, but it’s certainly the most boring of the explanations. And it doesn’t explain why I’m going to have “THEFT SYSTEM” burned into my eyes every time I drive at night.

The Tao of Grading Systems

Most people seem to enjoy my classes, but most of my students are in agreement regarding their hatred of the seven-point grading system I have used. I can understand their dislike for it, and I can understand the reasons. I don’t generally go into detail in my classes about the reasons for using this system, other than “it reflects the difficulty of theory department coursework.”

Well, that’s true, but it’s not the whole story, and students should rightly wonder about this when other professors are using a ten-point scale. But here’s the real purpose for the seven-point grading scale: the theory department has tried to enforce a 70% knowledge requirement as a measure for passing a theory class. That means a student should show knowledge of 70% of the material in order to pass on to the next set of classes. Since University policy is that a “D” is a passing grade, the seven-point grading scale builds this in, whereas the ten-point grading scale would allow someone to move up to the next section with knowledge of only 60% of the material.

Looking at the above diagram, imagine a student — we’ll call him Ludwig — who takes Theory II from me and earns a 63% for a final grade. If I am using the ten point scale, that means he gets a D. UNC considers a D a passing grade, so the registrar allows him to sign up for Theory III, getting around the theory department’s hope for a C or better to move forward.
Using a seven-point scale, however, means that Ludwig’s 63% translates into an F, meaning he gets to enjoy Theory II for another go-round.
Now, if the theory department were consistent about checking student grades at the beginning of each semester for every course, and dropping students who didn’t have a C or higher in each prerequisite class (yes, professors can do that!), then this wouldn’t be an issue. But that fact of the matter is that it hasn’t been consistently applied before now.
Starting in the spring, however, it will be done, and in fact the School of Music Curriculum Committee is currently looking into the possibility of having it be a registration-based requirement (i.e., students with a D in a prerequisite class would not be allowed to register for the course in URSA).
With that being the case, a seven-point grading scale would be unfair, since someone with a 74% would not be allowed to move on to the next section.
So, as of Fall 2008, I am adopting the ten-point grading scale. I know that my students will like this, because it actually represents some grade inflation (a 90%, which used to be a B, is now an A). But there is that awful drawback: A “D” is now a failing grade in theory courses.
Incidentally, this coincides with another change, which is the addition of plus and minus grades. The university is allowing individual professors to decide whether or not to adopt this system; I plan on doing so, because I think, for example, a B+ is a better grade than a B-, and the student should deserve credit for the extra work involved.
The almost humorous effect this brings into play is this: students used to hate my grading system because a 93 was the lowest “A.” Guess what: 90-92 is now an “A-.” So guess what score is the lowest A?
(Cue maniacal laughter here.) 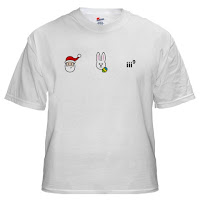 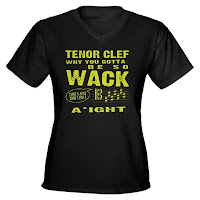 Two new designs join the Music Theory SuperMegaPlex! The first is for anyone who has incorrectly analyzed a dominant thirteen as one of those elusive iii9 (or, worse yet, iii6/9) chords. You know who you are…

The other is a shout out to one of my most underappreciated peepz, tenor clef. Don’t be dissin’ my brother, now!

Back in the Saddle

Some blogger I am, not posting anything since March!

I’m resolving to change that now, though… fall semester starts on Monday and there is plenty to talk — er, blog — about. First, of course, is that I’m back at UNC for another final year, filling in as Interim Director of Music Technology while the administration re-does the search for a new Assistant Professor of Music Technology.
Of course, I’ll be teaching music theory again as well: one section of MUS 104: Foundations of Music Theory, and one section each of every sophomore-level theory course. That means I’ll be teaching MUS 213 again, and that means the triumphant return of ¡Analysissimo! To my MUS 213 students: yes it’s something fun, but then again it’s a music theory class… I’ll let you reconcile that. ¡Olé!
I’ll also be teaching MUS 214 for the first time in years. Good thing? Bad thing? I’ll leave that up to the students to decide.
With the beginning of the school year I’ll also be starting up your favorite webcomic (okay, that part’s probably not true), Red Pen. Updates will once again be Mondays, Wednesdays and Fridays, starting this Friday. If you’d like your writing utensil or other type of office object featured in the strip, hey, that’s cool. Bring it by!