October 31, 2007 Uncategorized No comments
Okay, so it’s too late to buy it for this halloween, but just think how scary you’ll be wearing this number next year: 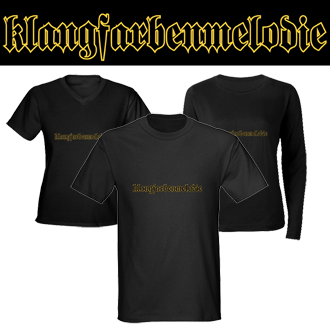 This is my first ever death metal t-shirt, except instead of “metal” you substitute “orchestration” and instead of “death” you say “pointillistic.” But other than that…
And if you are scared just by looking at the above shirt, and need something soothing, or you just really want to buy a t-shirt today but you’re not the type to have fraktur lettering on your apparel, here’s something that’s opposite in nearly every way (happy instead of scary, tonal instead of atonal, white instead of black, modern sans-serif instead of old style fraktur): 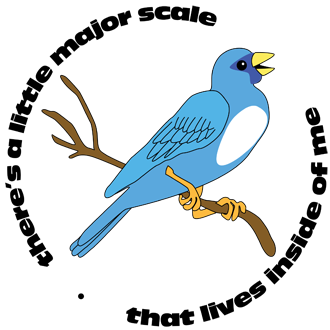 Order one or the other — or, better yet, both — on the T-shirts page. Happy Halloween!

October 11, 2007 Uncategorized No comments
New shirts and stuff for you today: 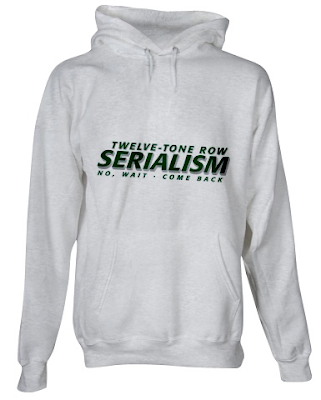 The perspective of the text and the placement on the shirt looks weird on the screen, but I’m hoping it will work in real life. If anyone gets sick looking at the shirt, will it be this odd perspective issue, or just the fact that it’s serialism?
Order these and all the others from the t-shirt page. Right now!

I’m heading back to Greeley today after spending the weekend with my parents in sunny Los Alamos, New Mexico… the premise for my visit was actually to attend a rehearsal of the Los Alamos High School “Encore” Choir, who will be performing a piece I wrote in 1992 on their October 30th concert.

They sound fantastic, of course, and the concert should be wonderful; I won’t be attending, though, since that’s the week my wife is due. They have promised me a recording and I will post it here when I get it.

Bach and the Minor Scales

A bit of theory nerdiness to start off the month. Download a purdied-up version if you’d like…

“So, then,” said old Bach, though he wasn’t old yet;
in fact, he was young, and his young heart was set
on a woman, Maria, he’d long ago met
and his wife he did want her to be.
Surmising that — though his shirt hid a six-pack —
The way to her heart was to show off his knack
For music, he chose as his plan of attack
To woo her with music theory.
“So, then,” he repeated, “That piece I just played —
The key was not major, you may be dismayed
to learn, but instead all the notes were arrayed
in a minor mode centered ‘round C.
“To write in C major, and work up a song,
Just stay on the white notes the whole way along;
The half-steps, you’ll find, are right where they belong:
From C to B, and F to E.
“To write in C minor, though, we need to lose
The B, E, and A in our scale, and use
Notes Bb and Eb — and Ab debuts —
But we still start and end it on C.
“Now, this scale is nice. It’s got a dark sound
And I’m sure that some future composer profound
Will write beautiful music that leaves ‘em spellbound
But it’s just not the scale for me.
“The reason for this, I have come to conclude,
Is not that the scale is nasty or lewd,
But an interval causes it to come unscrewed:
A whole-step from B flat to C.
“So what, you may think, we’ve had whole steps before.
But this one is in a place hard to ignore:
The final two notes of the scale. Therefore
There’s no tension before the release!
“Not only does this cause the scale to fail,
But the chords that we build from it also derail.
Our strong major V chord turns weakly and pale
Because it’s spelled G–Bb–D.
“So here’s my solution: tell me what you think.
This ‘Natural scale’ can be rid of this kink
If we change the B flat back to just B — (wink, wink!)
And bring back our half-step to C.
“We do this, and suddenly things start to gel.
That half-step between B and C just sounds swell
And our V chord is once again major as well
So the tension beefs up the release.”
Here, Bach paused for a moment, and turned to the lass,
And said with a sigh, “This is good, but alas
There’s a problem with it that one cannot bypass.
When you hear it, I think you’ll agree.”
Then he went to the keyboard and started to play
And he said, “Now, remember, we don’t have an A
In this scale, but A flat, and of course, that’s okay
But the problem is going to B.
“It’s an augmented second! The sound hurts your ear!
The interval’s large, and it makes it sound queer
As if written by some old Ummayad Emir
On the shores of the Caspian Sea.
“So for harmonies, chords, well, this scale works just fine
The tension in dominant chords is divine
But for melody-making, it doesn’t quite shine
With that augmented second, you see.
“Well, let’s fix it!” smiled Bach. “Hey, we’ve changed it before.
We altered one interval, why not alter more?
This time, we’ll take that old A flat we abhor
And we’ll raise it a half-step toward B.
“And so if we step back, and see what we’ve done
We’ll notice the augmented second is gone
It’s just whole-steps and half-steps, from C and hereon:
D, Eb, F, G, A, B, C.
“So now if you write music where melodies rise
In a scalewise passage where minor applies
You can use this new scale where strong tension pries
But where augmented seconds won’t be.
“There is one more thing, though, before I do close
You do recall, I hope, the reason we chose
To so quickly and gladly and deftly dispose
Of that flat to the left of that B?
“Because doing so gave us the tension we sought
From the leading-tone up to the tonic. But what
About going the other way round? I think not—
We don’t need tension from C to B!
“And so if we return to our minor lament
And imagine a scalewise melodic descent
We can use the same scale that we did just invent
And add flats back to A and to B.”
Fatigued, he turned ‘round. “Do you feel it’s enough?
I mean, Claude Monteverdi can’t think up this stuff.”
Then she stood, and replied, as she straightened his cuff,
“Oh, Johann… you had me at ‘key.’”